De-Escalation of Spanish State of Alarm

De-Escalation of Spanish State of Alarm 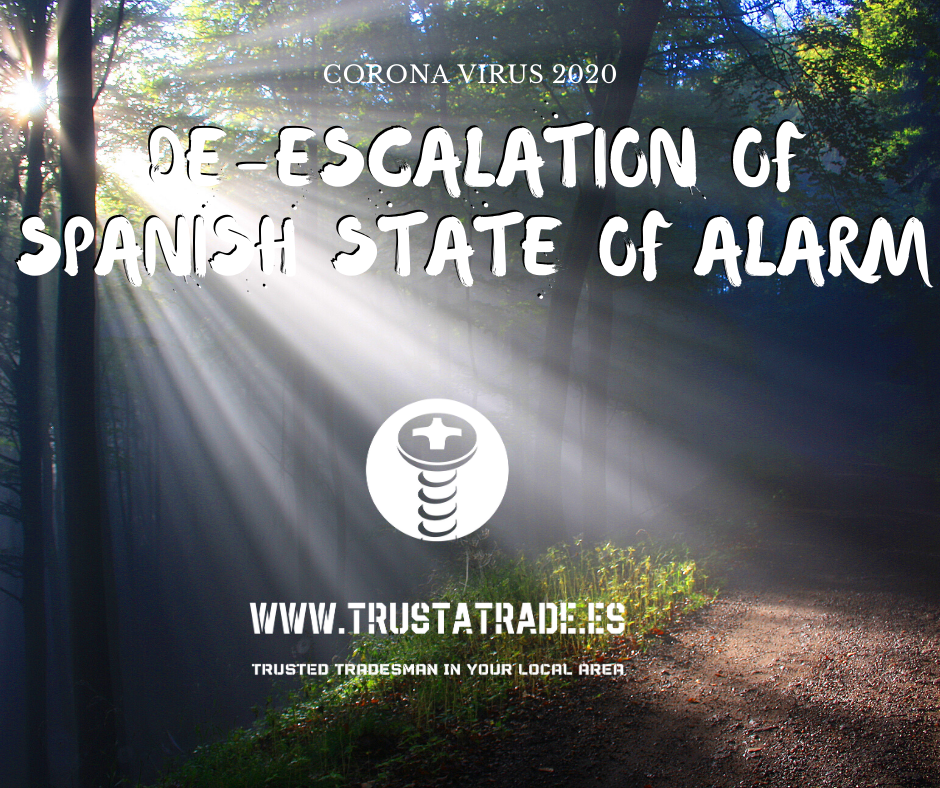 After what has been a difficult start to the year all around the globe with so many work and travel restrictions in place, we welcomed some positive news from the Spanish President on Tuesday evening.

While some tradespersons have been able to work throughout the state of alarm, it’s not necessarily a time when they have felt safe in going out to jobs.

Up until now the general understanding on construction, plumbing, electrician work has been that they are able to work if it is in an uninhabited place. For example, on a new build, empty office block or similar. Also, emergency repairs have been permitted for things like boiler repair, leaks etc. Gardeners have also been permitted to work throughout.

State of alarm here in Spain started on 14th March, and is due to finish on Saturday 9th May. We have endured the strictest lockdown in Europe, with no outdoor exercise permitted even for children for the first 6 weeks of quarantine. Hearing a plan back to some sort of new normality has been long awaited and was gladly received on Tuesday from the Spanish President.

Unlike most countries around the World, Spain have not set dates for their de-escalation process, but have instead set it out in phases. The phases are hoped to last 2 weeks, but contagion levels will be evaluated at each stage before developing to the next and therefore each phase may be extended up to 6 weeks.

The initial phases are stated as:

Preparation for opening of small businesses, food delivery and it is hoped that adult outdoor exercise for 1 hour daily will be permitted from then too.

Opening of small commercial premises, terraces open but with a maximum capacity of 33%. Tourist accommodations to begin opening but with many restrictions and no use of communal areas. Preferential times put in place for over 65s. Businesses that can take private appointments will also be open from this phase – Hairdressers, opticians and similar.

Solitary sports such as fishing and hunting will be allowed. Opening of indoor spaces of bars and restaurants but with restrictions in place and maximum occupancy of 33%.

Flexibility of freedom of movement. Commercial centres and hardware stores to open with increased capacity to 50%. Restaurants and bars to also increase capacity.

Of course a lot of details are still to be finalised and there have been many queries on specific regulations for each sector. We will bring updates as and when we have them.

As vague as the plan of action might be, at least we are finally starting to see a light at the end of the tunnel!